What is Nonna’s Trattoria? 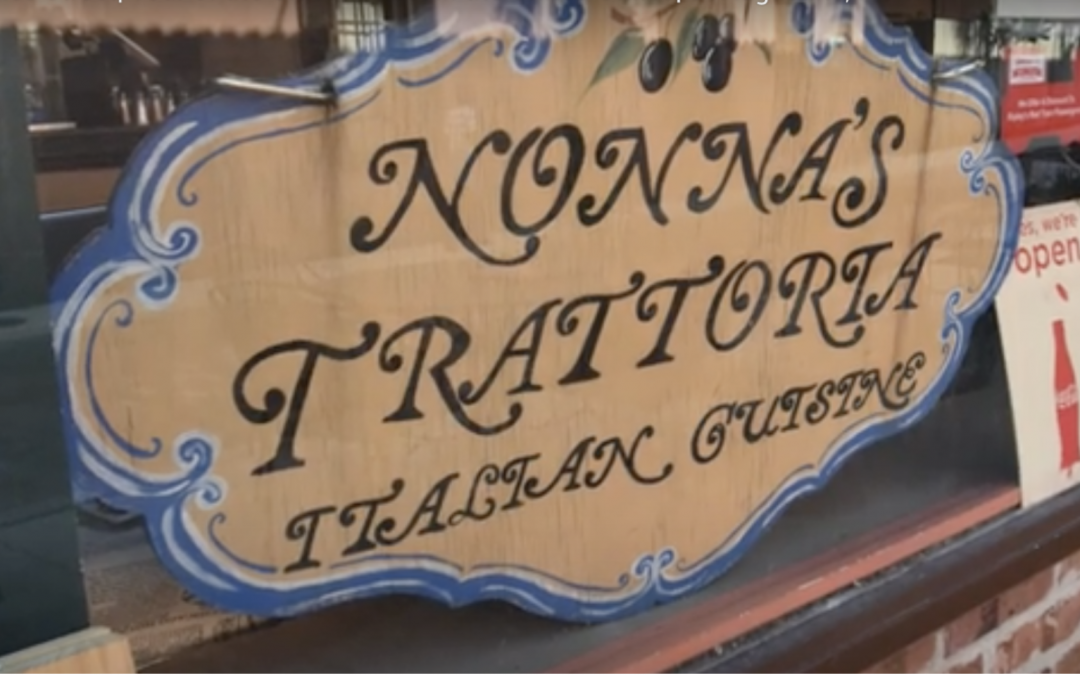 From time to time you find a place or a restaurant that you want to tell the whole world about. I can honestly say that I’ve found one of those places. A place where the food is excellent, the atmosphere fantastic, and the service is out of this world. A small place, on a small street, that’s a true hidden gem.

Nestled in the corner of the oldest city in the U.S. lies the oldest street, a narrow one way strip of road that has a ton of history and is packed with even more personality. Quickly becoming one of our favorite streets to visit in Florida, Aviles Street in St. Augustine, just feels different. More laid back than the rest of the touristy St. Augustine, Aviles Street will surprise you with its offerings. An old cobblestone road with museums, art and dining, this little street packs all it can into one cool, little location.

After 5pm, one of the first things you’ll notice on the street will typically be a very friendly man standing and waving at people with a really bright smile. At first I was unsure since we had never been down Aviles Street before, but as we got closer, we saw that he was setting up tables outside of a restaurant. As we approached him he stood up tall, gave the most perfect smile and asked, “How are you today?” in an obvious Italian accent. He was beyond friendly, and we immediately felt comfortable. He told us that his name was Adamo, and that he was the chef and owner of Nonna’s Trattoria. He explained that he was from Sicily and asked us if we liked Italian food. After a few pleasantries, he asked if we were hungry. He made it very obvious from the start that his goal was to seat us and provide us with a mind- blowing dining experience. Being that we write a food and travel blog, I am typically very skeptical when people proudly speak about their food offerings, service and their restaurant in general.

As we walked in, we immediately noticed how cozy it was. Every table had a lit candle, and there was music playing in the background. We were seated right in front of the window so we could see the beautiful horses pulling carriages as we waited to be greeted by our server. Soon our server, Brittney, came to take our orders. She had great recommendations and was extremely attentive our entire visit. She told us that if we liked cheese, we would be really happy with the lasagna or the chicken parmigiana. Nat decided to order lasagna, her favorite Italian dish, and I decided to go with the chicken parmigiana with full intention of trying some of the cheesy lasagna as well. We started with the house sangria and their signature bread and parmesan sauce. The sangria was incredibly fruity and served with a large cinnamon stick and orange slice. Adamo explained that the longer the cinnamon stick remained in the wine, the more it would infuse its flavor into the wine. After a few sips, we could definitely tell the difference. It was different, delicious, and very refreshing. We then tried the bread and homemade sauce. The bread was very soft with a nice crispy outside, but the sauce was the star here. It was like a really good opener at a comedy show before the headliner hits the stage. The bread and sauce were so good alone we could’ve stopped there and been happy. Then we saw our main courses…

When the dishes arrived we were in awe of the sheer size of them. The lasagna was done a little bit differently then what we were used to. I have had a lot of lasagna in my life, and often they come on a plate and in a cube shape, and they can be a bit dry and overcooked from time to time. Even in Europe, I noticed a similar trend, but Nonna’s did it a little bit different. Their lasagna was massive and served in a deep plate or bowl covered in melted parmesan and mozzarella, freshly grated parmesan, and fresh marinara sauce. We couldn’t believe our eyes and neither could the onlookers and tourists peering in through the window. Nat went to take a bite and had the biggest cheese pull outside of Chicago! One bite and she was mesmerized, then she passed the fork to me. “Taste this,” she said gleefully. I was blown away immediately. The sauce was rich and flavorful. I could really taste the herbs and seasonings in the sauce. The noodles were cooked to perfection. Did I mention all of that wonderful cheese? It was absolutely fantastic!

Next it was my turn. It’s not often that a restaurant gets two dishes right in the same night, but Nonna’s delivered yet again. May I say that my dish was able to hold its own with the lasagna in size as well as taste! The chicken parmigiana was unbelievably delicious! We already discussed Nonna’s talent with cheese and sauce so this time I’ll start with the chicken. The cutlet was huge! I don’t know where they got it, but I’m not complaining. Cooked to a perfect golden brown, the lightly breaded breast was so moist and tasty it would probably make Chef Gordon Ramsey jealous! Along with the chicken parm, I had a side of traditional spaghetti, again cooked to perfection and smothered in the house marinara and cheese. I passed a fork full to Nat for her approval, and it got a very enthusiastic thumbs up. In my humble opinion, the dish as a whole was phenomenal.

Finally, it was time for dessert. We were told to try the limoncello cake by another patron so we decided to order a slice. Adamo brought the cake to the table with his usual smile. This cake basically put the cherry on top for me. Lightly infused with limoncello liqueur and topped with mascarpone icing flakes, this tasted more like a slice of heaven. It was so good that if I wasn’t so stuffed, I would have ordered a second and then a third slice!

In summary, Nonna’s Trattoria is a winner! It’s a place that’s great for a date night, special occasions, or just hanging out. Aviles Street is an amazing little area, and if you find yourself in front of Nonna’s Trattoria I would advise you not to hesitate. Go in and eat! Nonna’s is charming and one of the best dining experiences I have ever had. The owner and staff bend over backwards to make you feel special as soon as you step foot in the door, and they make sure that you are smiling and continue smiling throughout your meal. I am someone who likes to give credit where credit is due so I’d like to say job well done, Nonna’s Trattoria! This is officially one of my favorite little restaurants in Florida.